Coffee and the Cloud Forest

We arrived in the magical Intag valley, walking down from the mountains through various levels of cloud forest and down into the sub-tropical jungle. We rode on horseback until the path became too steep and muddy. We continued on foot, slipping and sliding in the mud. Admiring the incredible biodiversity of plants and flowers, it […]

We arrived in the magical Intag valley, walking down from the mountains through various levels of cloud forest and down into the sub-tropical jungle. We rode on horseback until the path became too steep and muddy. We continued on foot, slipping and sliding in the mud. Admiring the incredible biodiversity of plants and flowers, it felt great to be in the cloud forest again. We were able to drink straight from the crystal clear river that was descending from the mountain, not yet having been contaminated by the activities of humans. We crossed many rivers, and were all sweating profusely in the hot sun as we walked for several hours. 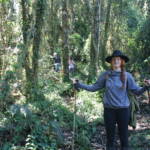 We arrived in Cuellaje, which is a small town in the Intag, which was where we said our goodbyes to our guide who had ensured we made it down the mountain in one piece. We met up with Ivan Saurez who runs the trekking company that organized the trip. He took us to his property to stay, which is a paradise set on the river with a bamboo cabin built to shelter visitors. With hammocks strung up and the sound of birds singing and the river rushing by, this is the kindof place you get the feeling you could stay while. He was excited to roast coffee with us, he had a little roaster he had recently bought in Colombia. He also grows his own organic coffee and we were able to spend some time harvesting fresh coffee. We roasted a few batches of coffee, and enjoyed the rich blend out of a stove top espresso maker. 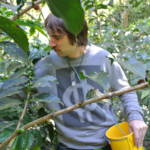 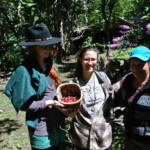 We went to Apuela the next morning, which is the largest town in the Intag. We stopped along the way to admire some beautiful views of Cotocachi Volcanoe and the Intag valley. We went to visit AACRI which is the coffee cooperative that we source all of our coffee from. They walked us through their process: receive the coffee from the farmers, do grading and quality control, dehusking and then drying. After getting a tour of their facility we did a coffee cupping, which is a fancy way of saying that we drank more coffee. 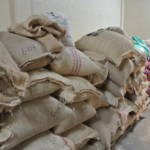 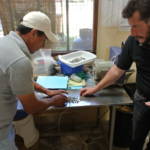 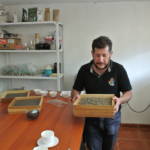 From Apuela we hopped back in Ivans truck and he drove us the short distance along the river to the Arias family farm. This is where I have stayed everytime I have visited the Intag. It is a very beautiful farm, along the river with a variety of banana, papaya, guava, coffee and corn plants (among many others.) It was a trip down memory lane for me, we stayed in the same cabin by the river that I had lived in for three months in 2011. We relaxed by the river for awhile – watching the river flow quickly while sitting on the smooth rocks. We had a nice family dinner with them, and then played some card games. We passed a nice evening by the river playing guitar, with the only event being a run in with the dreaded Botson Fly: a huge flying insect that is attracted to light bulbs and terrorized the women for awhile before meeting its end under Simons boot. Yikes! 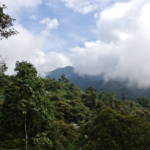 We woke to another beautiful day in the Intag, with blue skies and sun shining. We walked to the pools and took a dip in the hot springs, enjoying the wonderful view of the mountains from the water. We met a German girl there named Lucy who was volunteering in a nearby town called El Rosal that has a womens cooperative that makes organic soap, shampoo and skin cream. We arranged to visit the community through her, and parted ways. We went to town again that afternoon and I met with the coffee cooperative to have a business meeting. Direct trade relies on having ongoing dialogue between the farmers and us: the people who sell their coffee in the north. These types of meetings are crucial to what we do, and what makes the difference between us and large coffee buyers that never bother to visit their suppliers. 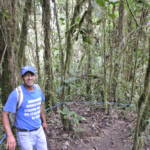 The next morning we said goodbye to the Arias family who had hosted us for the last few days. We caught the bus to another town in the Intag: Garica Moreno. From there we caught a “ranchero” which is an open concept bus common to South America. This was the school bus really, but we were tagging along to save a few dollars. It was interesting watching all the kids get out from school. The freedom that they had between school and home making them hyper active. Kids of various ages spraying each other with cans of spray foam and bursting water balloons on each others backs. We rode on top of the bus on a winding mountain road, the bus in front of us kicking up dust making it necessary to shield our eyes as we sped along. Finally we arrived at our final destination of Junin. We stayed at the eco-cabanas there, a very nice bamboo building set in the primary forest near the town of Junin. We met Rosario there – who was our host for the time we had there. There were lots of hammocks everywhere – we made a french press of Rio Intag coffee and played Scopa, and Italian card game. 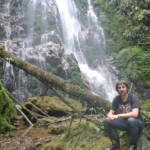 We walked to the community ecological reserve the next day, a section of primary forest that is abundant in wildlife and fauna. We marvelled at the magnificience of nature – our guide pointing our various plants that are poisenous, and then usually another plant that is the antedote that happens to grow next to the other one. We walked to the waterfall with Ernesto Ramirez, our guide. He spoke to us about the struggle against mining in this area. Although the soil is extremely rich, there is another even more valuable resource under the dirt: copper. Ernestos brother Javier spent 10 months and 10 days in prison for daring to lead the resistance against the mining company. As we walked through the forest Ernesto told us about why he was opposed to mining. He stopped by a large tree and told us that in the time of the Japanese mining company his father had been called upon by his uncle to help him because the mining company workers were trying to trespass on his land. Ernestos father had come to the aid of the uncle and a confrontation ensued. In the midst of it all one of the workers drew a gun and fired a bullet through Ernestos fathers heart. He died there, and the Ramirez family has been staunchly opposed to mining since then, although they were opposed before that to. They believe the mining would contaminate their land – the very land that has given them everything they have in life. Losing your father to the struggle makes selling out to the company an unlikley option, even two decades later. 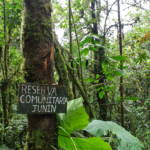 We arrived at the waterfall, an impressively high cascade of water coming out of the cloud forest. We crossed paths that the mining company had cleared along the way. There is evidence of the pollution that the company has caused already, despite the face they have not even started to exploit the mine yet, they are just doing sample drilling. Ernesto points to one waterfall that has an orange colour to it, more evidence of contamination. 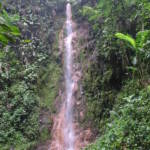 I bathe under the clean waterfall and we have lunch at the top of the falls. Ernesto tells us that they will have to clear all this primary forest if they go ahead with the mine. He explains his concerns that to mine copper you must excavate large amounts of dirt – there would be a lot of debris that has to be sorted through to get the polished final product. This by-product is called “tailings” and in a place that is as steep and mountainous as the Intag: there is nowhere flat to keep these tailings ponds. So these tailings will inevitably leak into the watershed and impact the communities down stream who rely on the river for all their water needs.On our way back we had to cross a creek that is covered in a grey slime. The slime is another impact of mining exploration. Ernesto becomes visibly upset just thinking about the fact that the mine is not even operating yet and the water is already being polluted.

Despite the evident contamination, the coud forest reserve is extremely beautiful. The sounds of exotic birds and insects fills the air, and life seems to protrude from every corner here. Orquids and air plants dangle fromtrees, and humming birds dart around from flower to flower. We walk back down to the cabanas – with Ernesto talking to us about life here. He says mining is a lazy choice for people, that they would be better off farming in the long run but they think working for the company is easier. But once you work for them and stop growing your own food you have to live from the store, he says, and the store is more expensive in the remote villages.

We relax in the hammocks and have coffee when we get back. After we walk into the tiny town of Junin, which is comprised of maybe 15 houses. There is a historic church that was breifly used to keep captured paramilitaries inside of when the community was resisting against a Canadian mining company. However, Junin is now deeply divided. A banner on Javier Ramirez house proclaims “Say no to mining!” while workers from the mine mill around after getting home from work. We say hello to a family that I stayed with last time I was visiting. They tell me life has been hard with the mine going ahead. Imagine dedicating yourself to an ecological struggle to protect your home, and having the struggle fail and being submitted to enviornmental degradation. We reflect on the story of Javier Ramirez who was arrested for resisting mining. To go to prison for almost a year for the crime of protecting your community from environmental devastation, seems so clearly wrong. IF we lived in a world that made sense then the primary forest that covers these hills would be conserved. Instead the entrepreneurial project of people could be supported: they grown and sell a multitude of agricultural products such as: beans, coffee, plantain flower etc…. This represents a problem in the world. People are immensely creative and imaginative but if they are not supported, if the investment is made into mining instead – then we will be left with a bleak future. Are we choosing to sacrifice the environment that future generations will depend on, so that companies can profit right now?

We catch a ride back to town on the “Ranchero¨ the light rain misting us as we bump our way down the mountain roads. For the school kids, it is just another morning. We reflect on all we have seen in our short visit to Junin. The people were kind, and their stories left a deep impression on us. We also leave feeling a deeper connection to the hard working farmers who, through their labour of love, provide us with the coffee what we love so much. So from us to them: a big thank you! 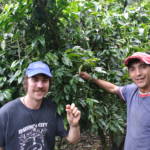