Descending into the Cloud Forest

We arrived in Quito to a beautiful sunny morning after 24 hours of travel time and having visited 4 airports. We spent a nice day in Quito visiting the Centro Historico, which is full of ancient architecture hinting at the colourful history of the city. We walked around the city, visiting several parks, stopping from […]

We arrived in Quito to a beautiful sunny morning after 24 hours of travel time and having visited 4 airports. We spent a nice day in Quito visiting the Centro Historico, which is full of ancient architecture hinting at the colourful history of the city. We walked around the city, visiting several parks, stopping from time to time to get fresh juice and snacks from street vendors. In the afternoon we hopped on a bus to Otavalo.

Upon arriving we contacted Lionel who owns a farm where we would stay the next couple of days. His place was recommended by a friend and upon arriving we could see why. He has a cabin perched on a hill side in the village of Pucara, over looking the small city of Cotocachi with a view of several Volcanoes including Imbabura. He has llamas, chickens and bunnies and a farm where he grows organic Quinoa.

The next day we met up with Ivan, who coordinated our trekking adventure that we had lined up over the past few weeks. He took us to his home in Otavalo where we were fitted with rain boots and ponchos, as we were heading up into the mountains and rain was a certainty. We did yoga and went to bed early to prep for what was to be a challenging beginning to our hike the next day. 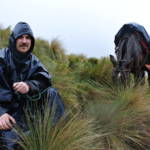 The following morning we woke up at 5:00 AM to leave for the trek. The idea was we were hoping to beat the rain by taking advantage of the clear mornings. Unfortunatly it was already raining when we got up. We had breakfast and packed Ivans Toyota Land Cruiser and drove from Pucara to where we would leave from to start our hike. As he drove us up into the mountains, Ivan explained what our Trek would be like. We would start at the beginning of the Paramo, which is an eco-system in the high Andean mountains where no trees grow and the only vegetation is shrubs and grass. We would hike up into the high mountains up to an elevation of 4100 M. above sea level, which is the highest point in the mountain pass we were crossing. From there we would descend to the village of Pinan, which is situated at a lofty 3200 M. above sea level. After that we would begin descending into the cloud forest, and then after that into the sub-tropical jungle. 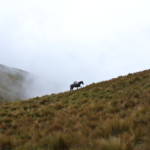 We drove up into the mountains as far as we could, and reached a point where the road went no further. This was around the town of Urcuqui, where we met our guide for the trip: Luis Alfredo. We began walking up the mountain path, with three horses and us walking leading the way. Two horses were for our cargo, and the third was for in the event of an emergency. About 1 hour after we began the hike it started to pour rain. We were prepared with: rain boots, waterproof pants, rain jackets and ponchos. We continued hiking high into the paramo, a harsh but beautiful landscape where its often wet and always cold. We ate in the rain, scarfing down a quick pasta lunch before moving on. Still it rained, we would later find out that this was the worst weather that our guide had ever experienced when guiding a group. We began descending from the paramo – slipping and sliding through the wet grass and mud. We had to cross rivers, which we did on horseback one at a time. As the day wore on the rain became a challenge, we were cold and wet. Eventually we arrived in Pinan after 30 kms of trekking through the mountains. A few young women met us at the entrance to the town and welcomed us. Pinan is an entirely unique village, unlike any other that I have visited. All the houses are made of adobe and have thatched roofs made out of paramo grass. The village of Pinan is located on a hacienda, which was the Spanish plantation system that woud usually involve a wealthy Spanish land owner and indigenous workers that were more or less slaves to work the fields. In this situation the hacienda spanned 35,000 Hectares, a massive amount of land. The people who worked the land in the past were allowed to build their own homes on the land and thus the village of Pinan was born. However all these years later, the descendants of those workers still live there but they are not allowed to grow their own crops or have livestock or even renovate their houses. This is because the land all is owned by one rich Hacienda owner who lives in Quito and has no interest in sharing the land with the community. To make matters more complicated the area now also falls within the limits of the National Park Cotocachi-Cayambe. 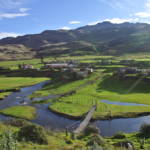 So basically the people of the town live in limbo – unable to work except by seeking jobs elsewhere or having tourists come visit. All this due to the greed of one Hacienda owner and a government that does not care about them. I asked our guide if any one goes hungry because of this situation, he said unfortunatly they do. For his part the Hacienda owner is willing to sell the whole piece of land for $2 million dollars, an absurd amount of money for the locals that is completely unatainable. So the community is locked in the past, living in adobe huts with an uncertain future.

We arrived at the Refuge where we would stay in Pinan. It is a very nice and large building, with a fireplace and kitchen. After getting into dry clothes and eating dinner we went to bed early, exhausted from the long day.

In the morning we visited the school, where they have about 60 children. We ended up giving an impromtu English lesson to the class, and they all seemed happy and eager to learn. We then had a relaxing day of playing cards and drinking coffee. We went for a walk and watched the sun set into the mountains. We had dinner with a fire blazing, and Luis and I shared a few beers and talked into the night. 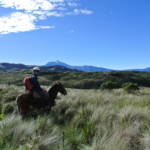 We were lucky enough that we were greeted with a crystal clear blue sky and the sun shining the next day. This section of the trip we got to ride horses up into the mountains. We had great views of the Cotocachi volcanoe as well as Pichincha and Cotopaxi. We got to a point where it was too steep of a descent and we had to get off the horses and walk. It was walking that we arrived into the cloud forest region, the wonderful valley of Intag. We were picked up by Ivan and stayed at his coffee farm in Cuellaje, Intag. It felt great to be back! 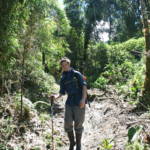